The Most Beautiful Girl In The World – The Prince Fan Novel

When in 2009 I swore that I would never write a novel again, my publishers thought I had lost my marbles. At that time we sold more books than ever before. I must admit I had also just signed a very friendly-dotated contract for two more novels. But …

Shouldn’t you leave when you reach fever pitch?

I immensely enjoyed the feedback of my readers and the live shows. But in the end, my life as a writer had lost its glamour. Being successful meant I had less time to write and while on tour and writing I spent most of my waking hours all by myself. Also, when I create a novel, my head is completely occupied. I am never a hundred percent happy with my writing. Being so critical has its advantages for my books, as I search for better sentences over and over again. But being permanently discontent is not exactely a heavenly living condition. Hence I ended my life as a novel writer and dived into my career as a script writer. I was a hundred percent sure I would never sit down again and ruin my life to write another novel.

I think, that every human being admires an idol who has that certain significance to their lives. When Prince died on 21st April 2016, it struck me cold. I was in the middle of a script meeting in Munich, when I hear the news. Somehow I survived the meeting. I spent the evening and half the night walking through the streets of Munich speaking with my friends over the phone who were just as devastated as I was.

When my cell phone battery went flat I sat in restaurants and bars to recharge it, all the while speaking with ex-girlfriends, ex-musicians and friends of old times. Some of those friends I hadn’t heard of in 30 years, but when they heard of Prince’s death, they remembered how I had traveled through Europe to see his shows, had Prince clothes sewn and had annoyed my rock band with studied dance and show elements.

Old school mates and band members, neighbors from a different lifetime and even my first ever German girlfriend phoned me that night. Eventually I landed in my hotel room and cried. What had happened? My artistic idol and role model of my life, my greatest musical inspiration, he had vanished. But he had always been there. Every day, since I started making music, every day of my writing life. Every single day.

In my whole life, I will never forget this night and the following month.

I regard myself quite good at accepting the fact of what is and what is not anymore. This time it was different. Through the following weeks I spent most of my time in internet forums chatting with Prince fans all over the world. I began to write down my feelings and after a month it became clear, this is going to become a novel. This is going to be a musician’s declaration of love to music – as well as my little hommage to … him.

All this happened almost two years ago. And again I can reassure you: Writing a novel ist the most horrendous act a writer can perform. And for sure the most beautiful. This book already is the most precious thing I have ever posessed in my life. Long before being published, this book has brought amazing people into my life and made me conscious once again of the preciousness of music for mankind.

This is a book by someone who loves music – for all of you music lovers out there.

I am so thankful for everything I had the honour to learn about music over the last years, thankful for the vast amount of musicians and bands I got to know, the studios I visited, the vocal rehearsals I eavesdropped on, the nerdy shoptalk with sound engeneers, the vast amount of fantastic Prince live videos I inhaled and the surveys on music I studied, who ultimately confirmed what I had always known: If there is a chance for mankind to come to their senses and unite – it will be through music. For when do people feel more blessed as when they rejoice in music?

Music and Love – out last chances to come together …

The Most Beautiful Girl in the World is published in the U.S. on his 60th birthday, on June 7, 2018. I already look forward to the worldwide reactions of people, who love his music just as much as I do.
For more Information what the press and the german Prince fans said about the book: Facebook German and Facebook US.

Michel.
PS: To all you musicians out there: THANK YOU!!! Without you my life wouldn’t be half as beautiful. 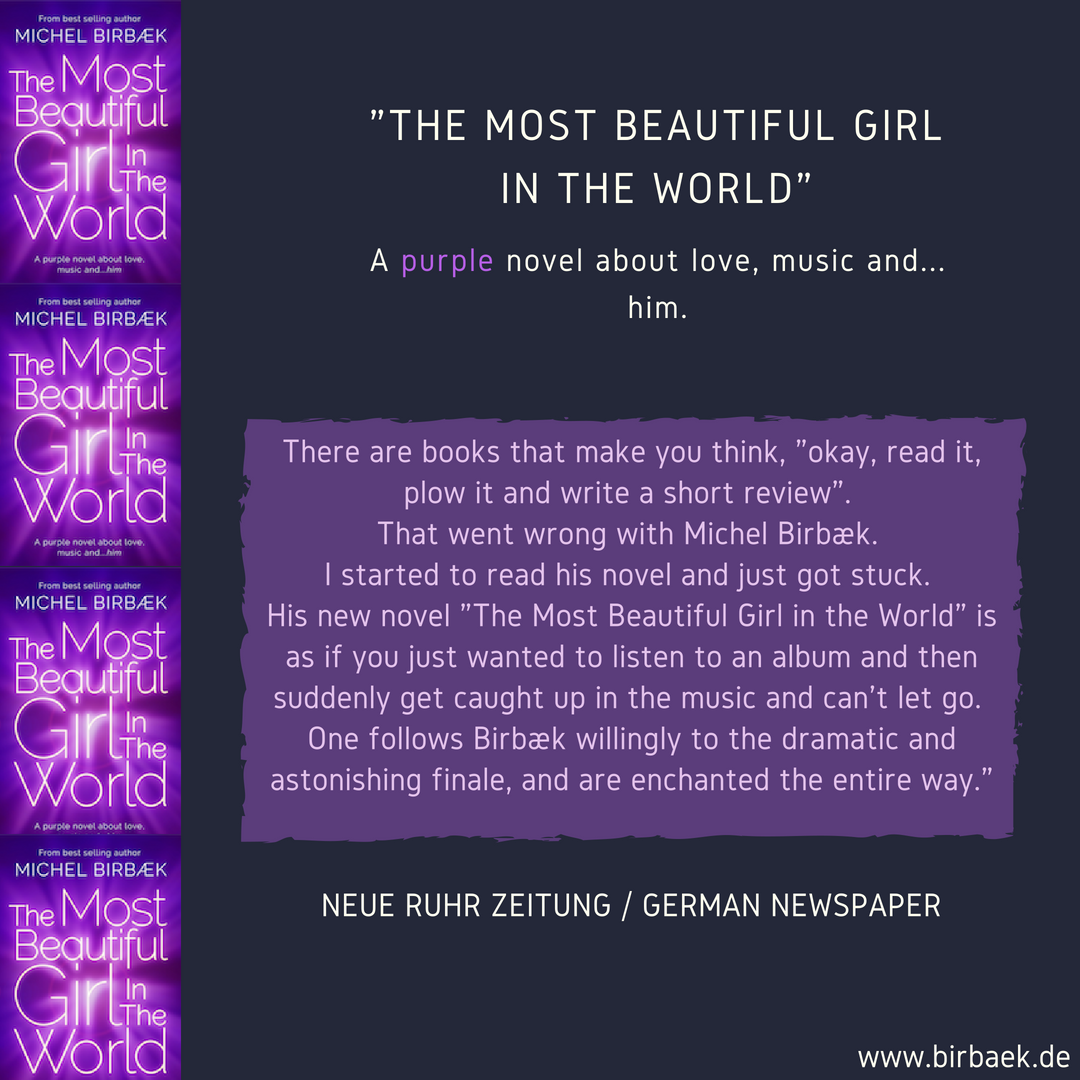 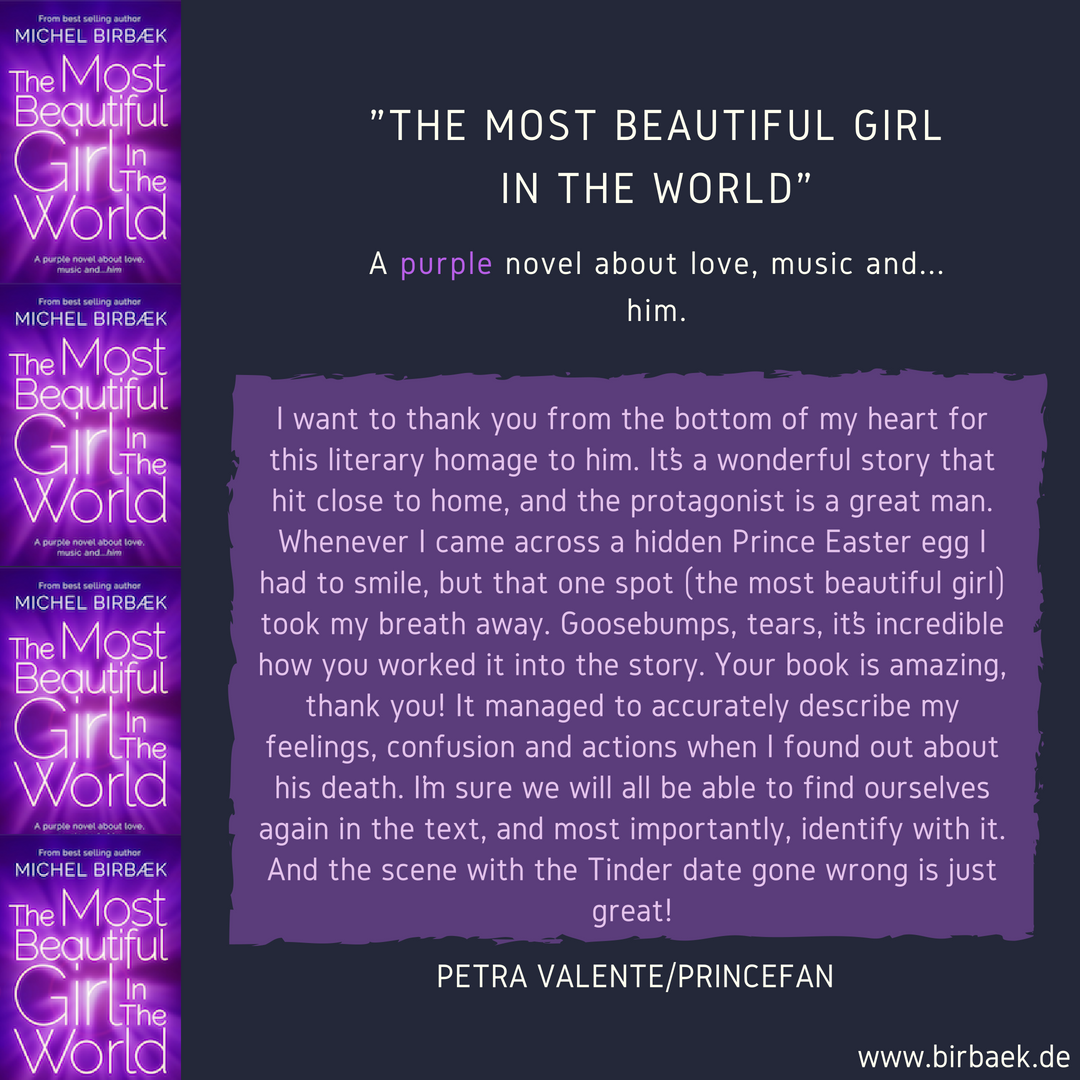 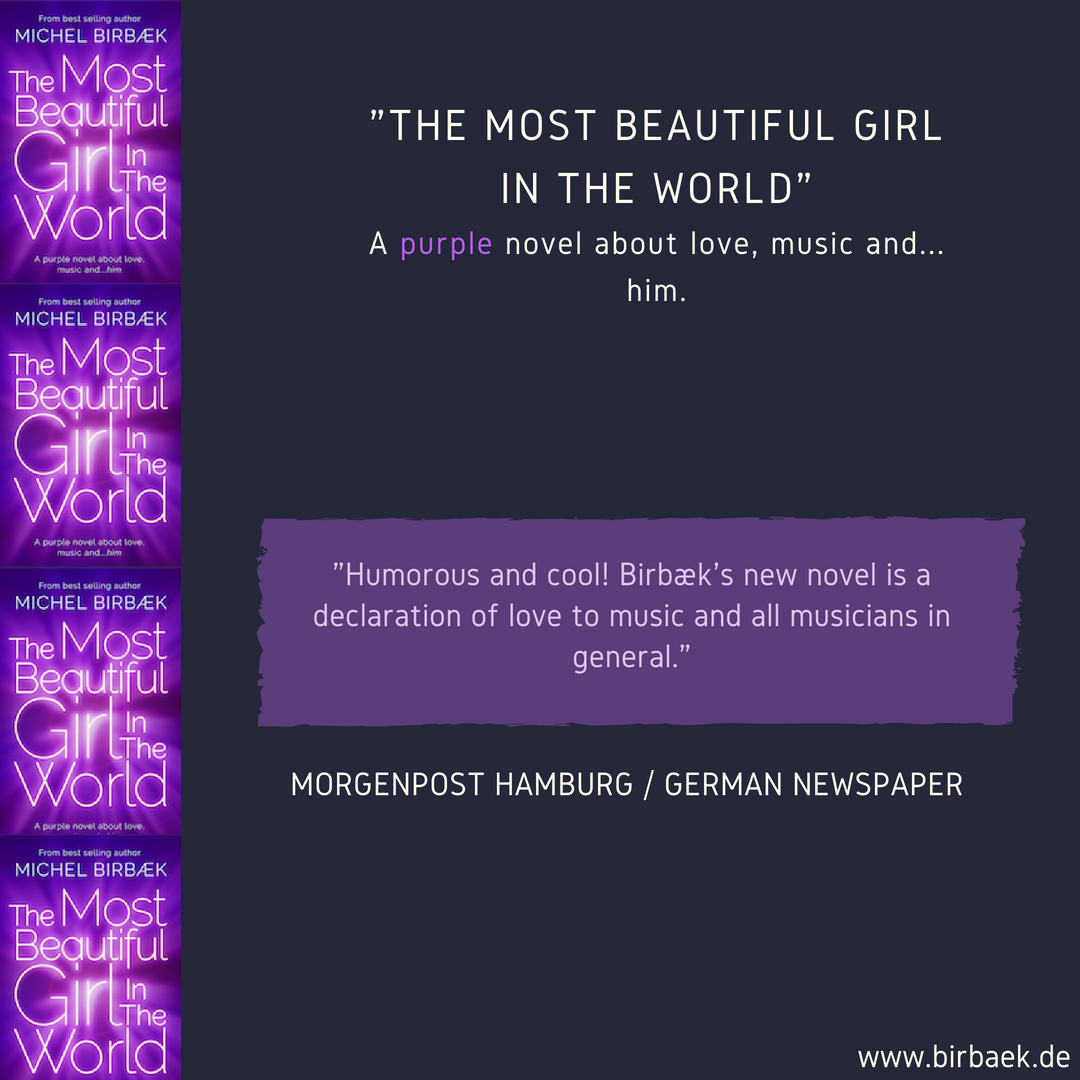 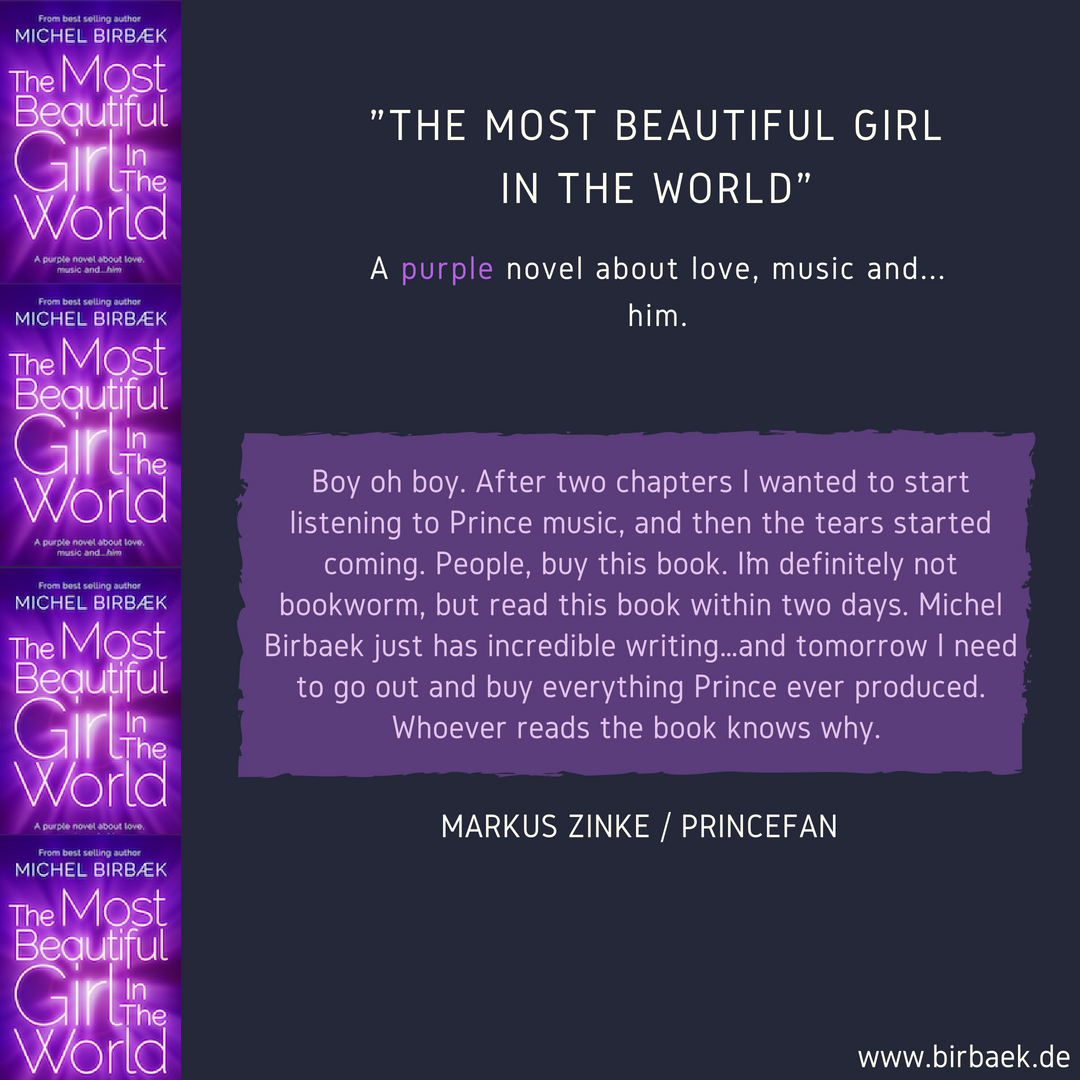 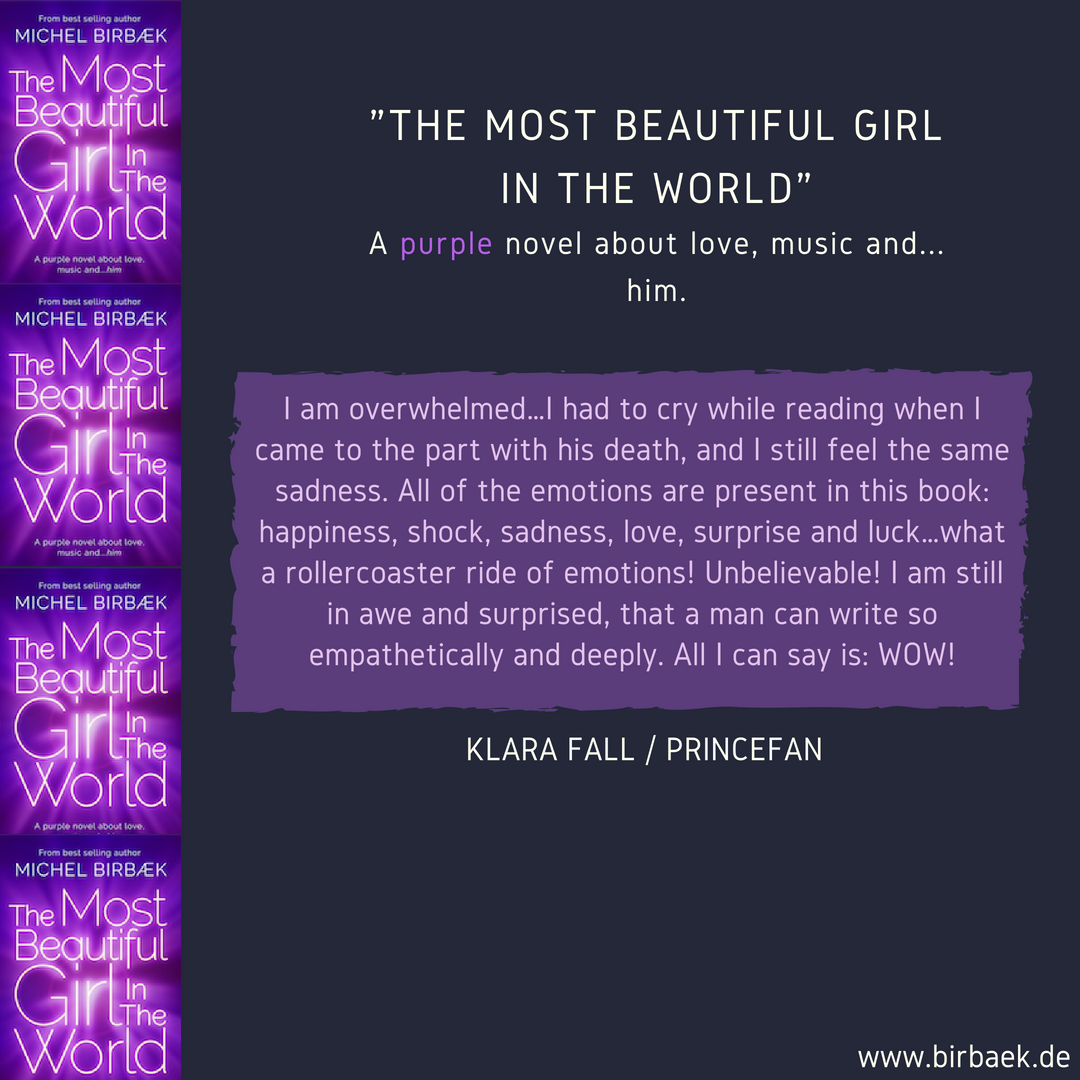 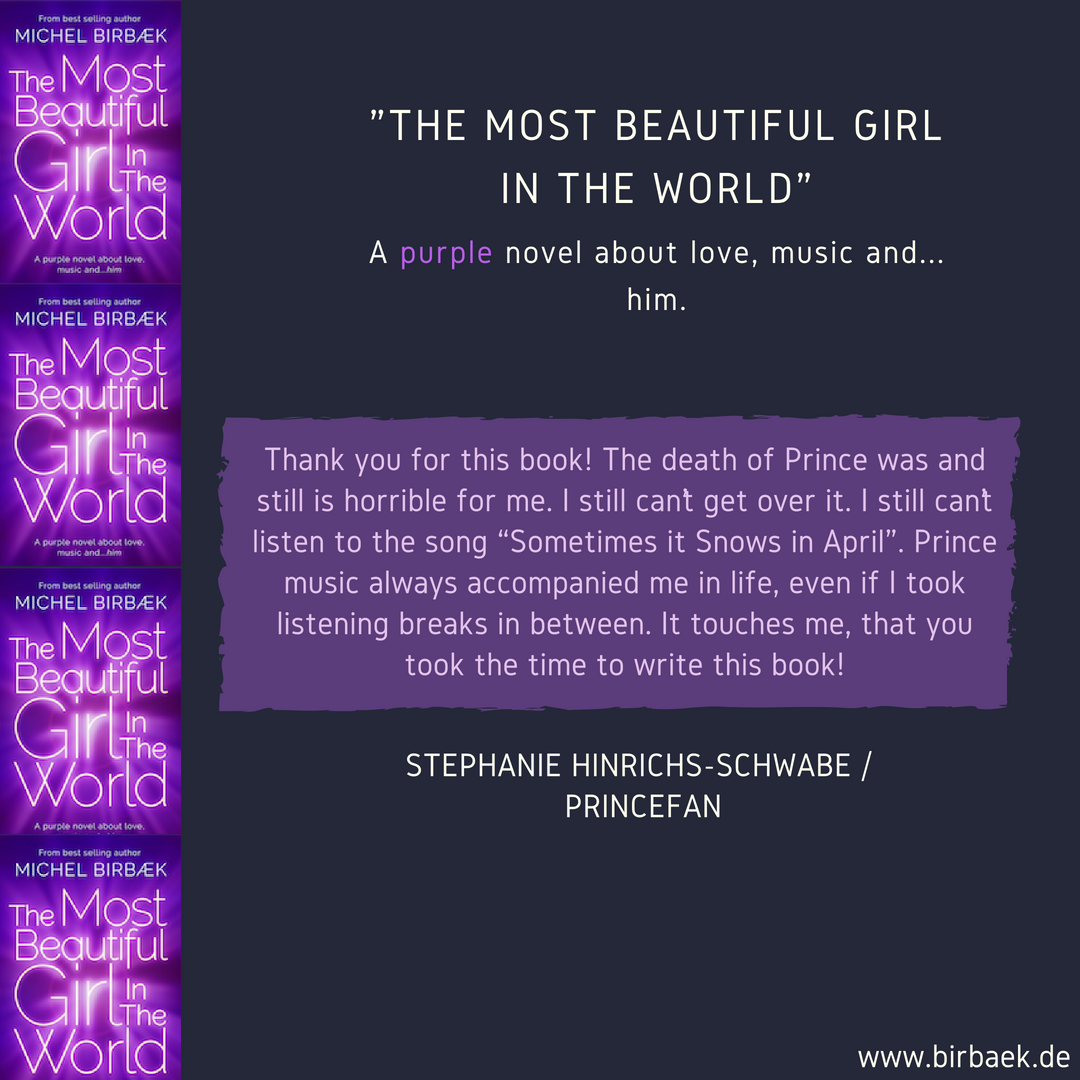 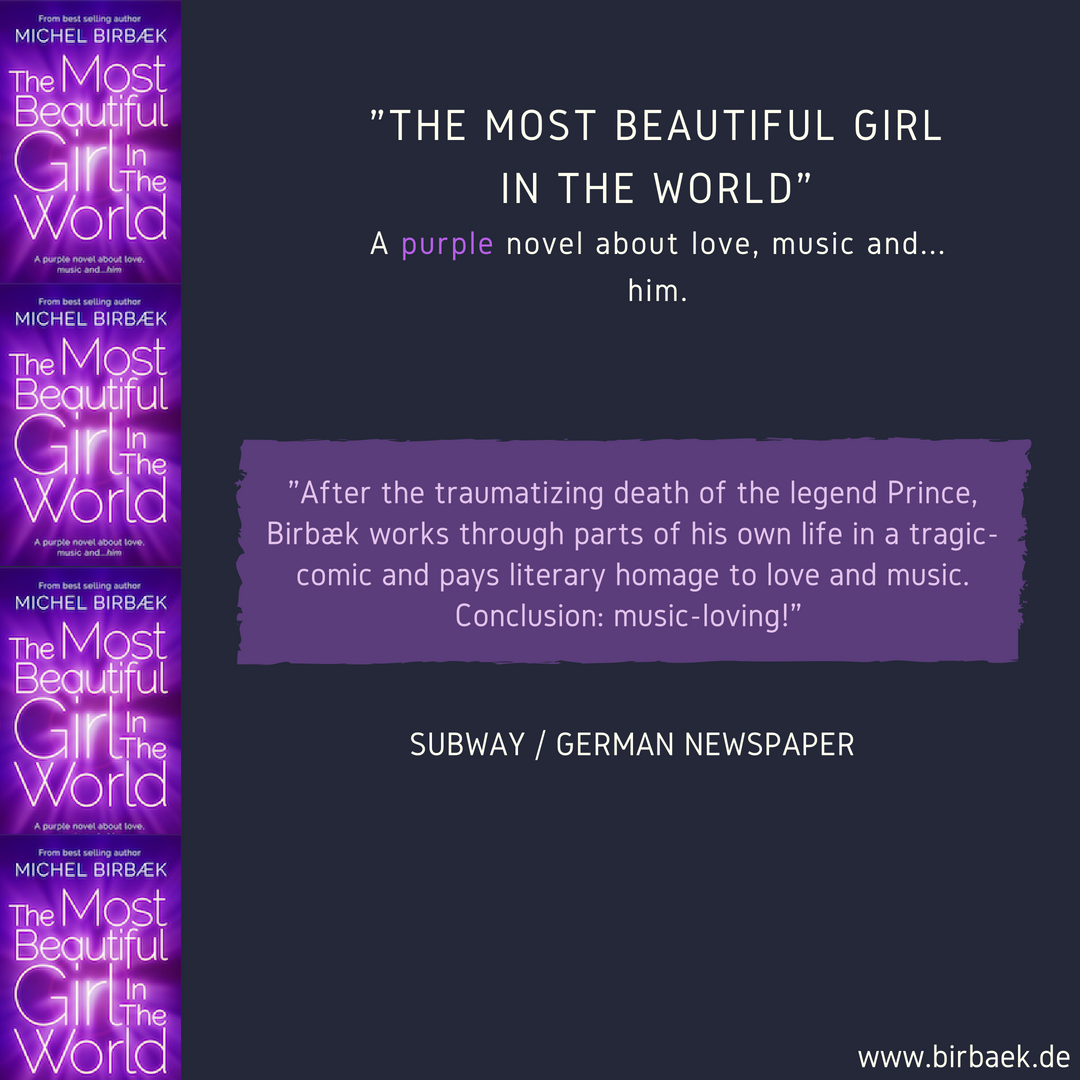 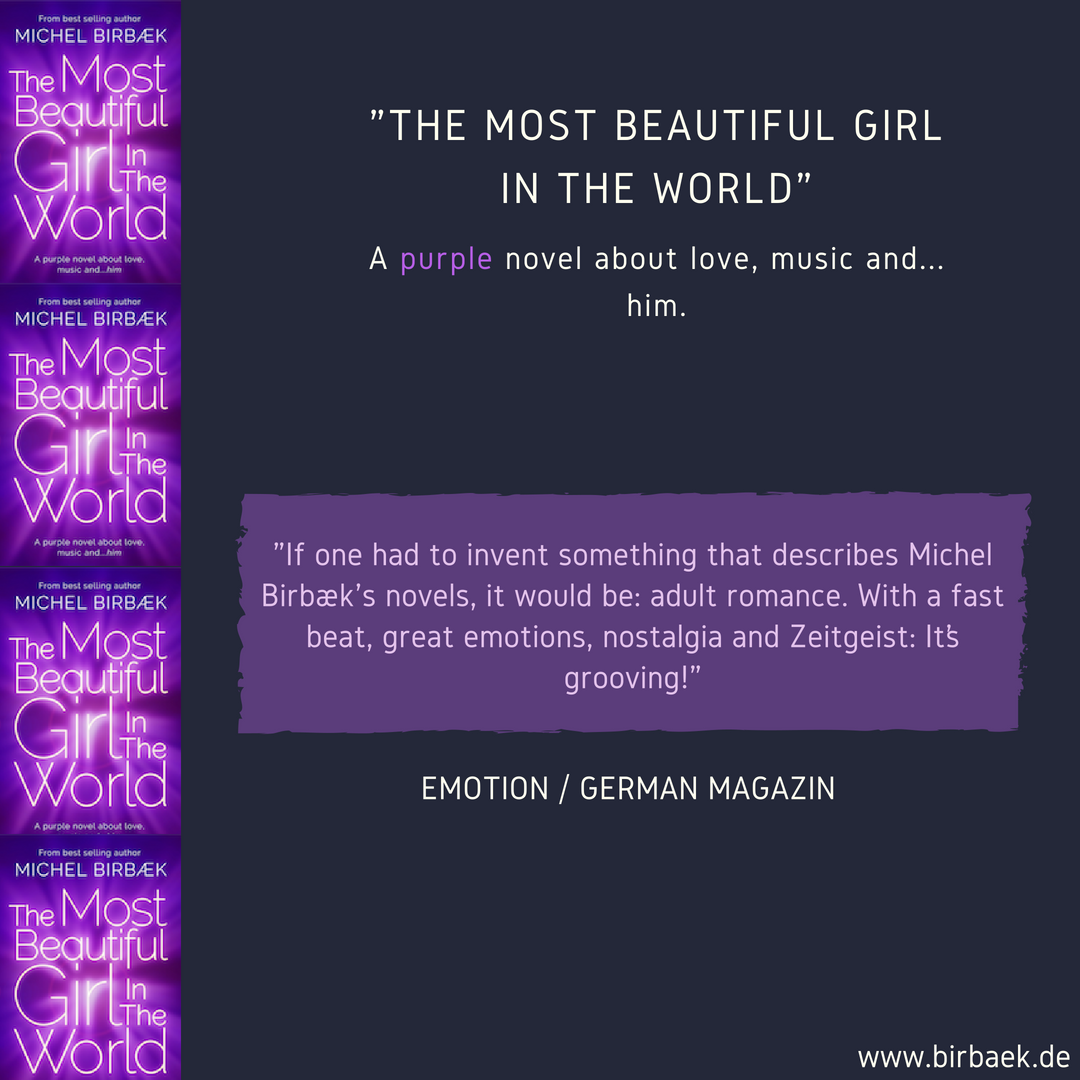 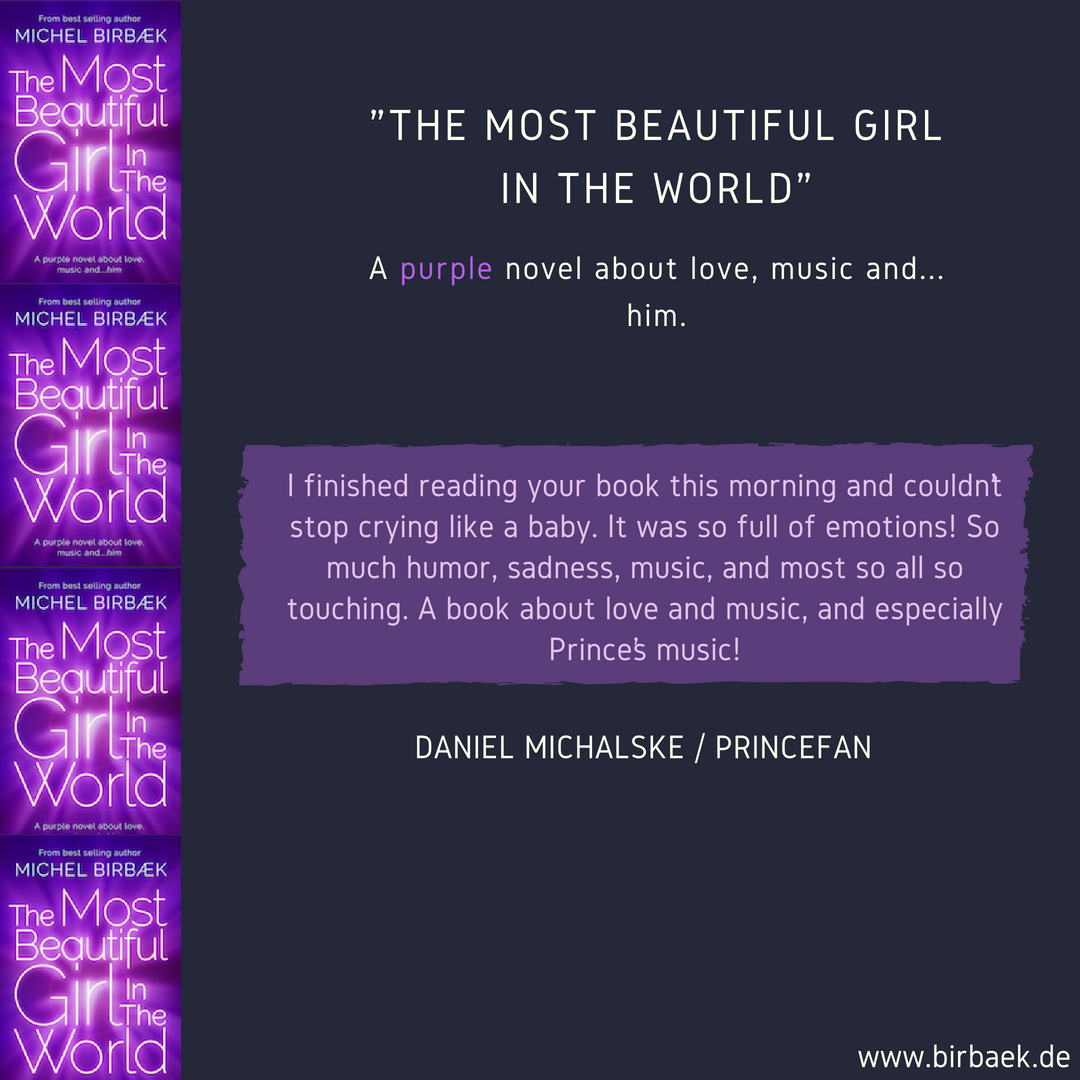 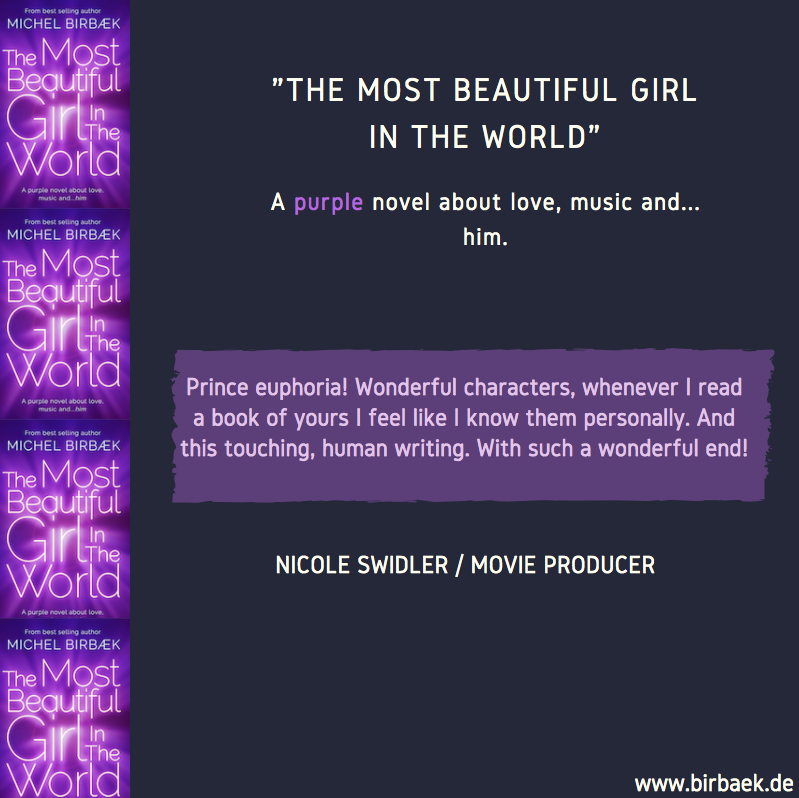 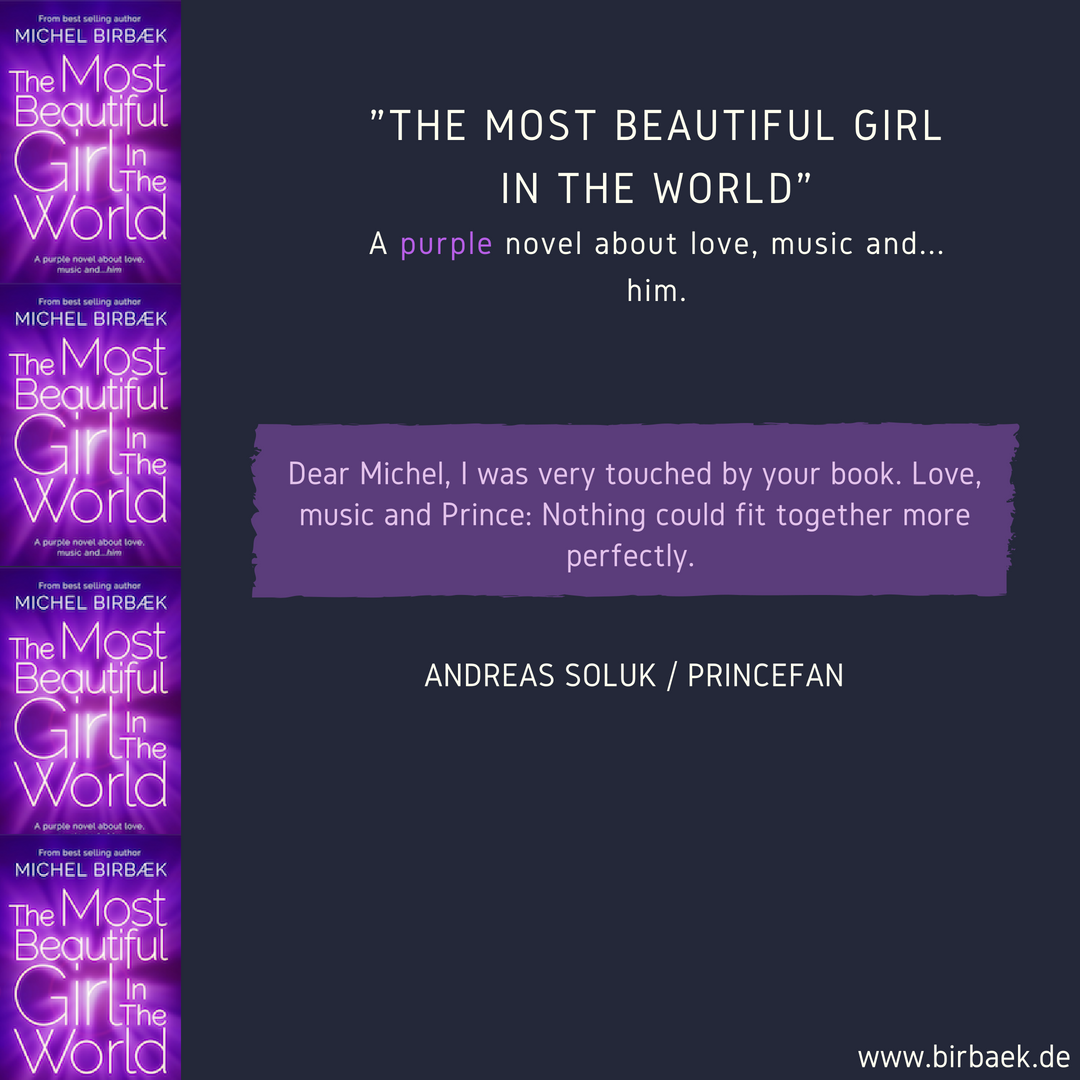 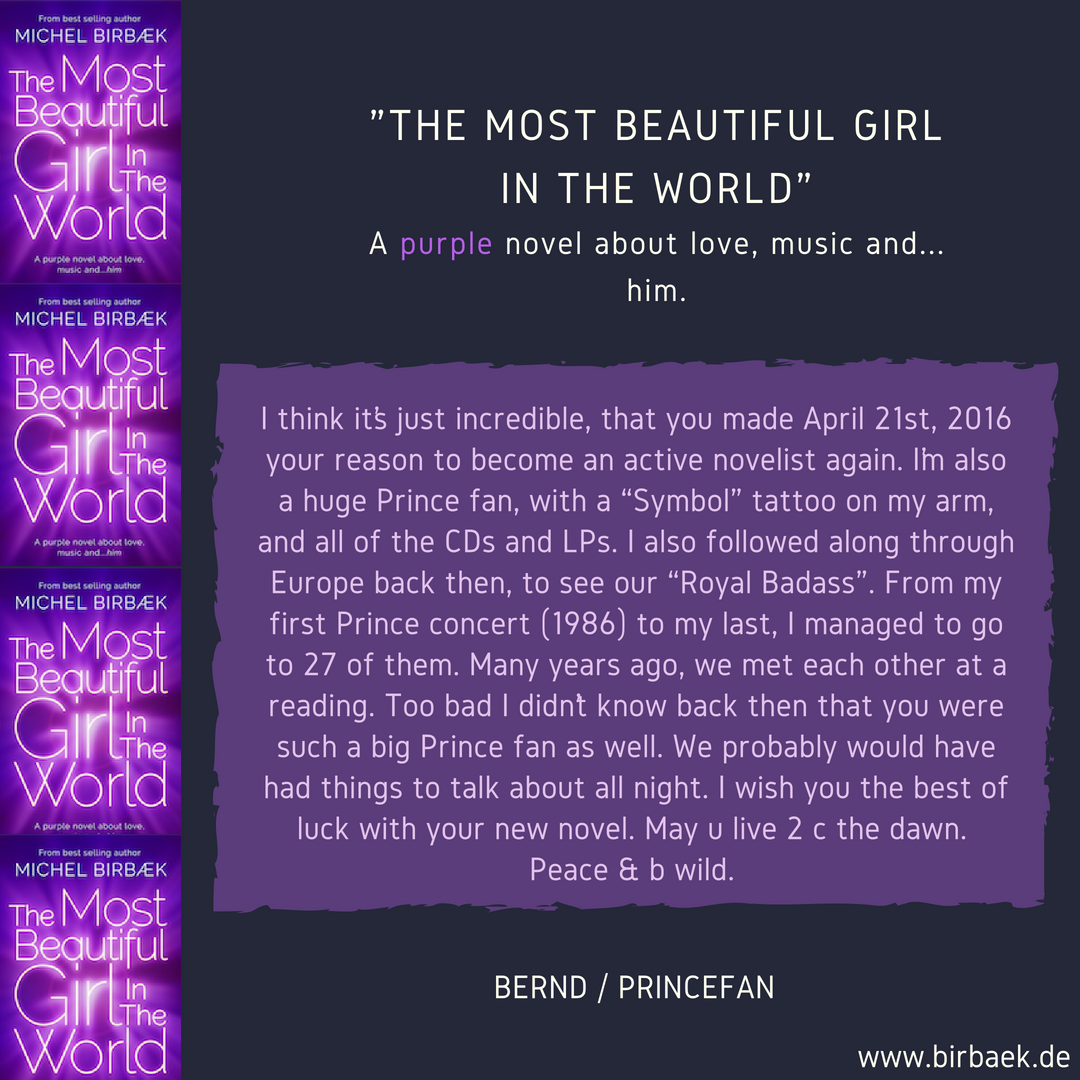 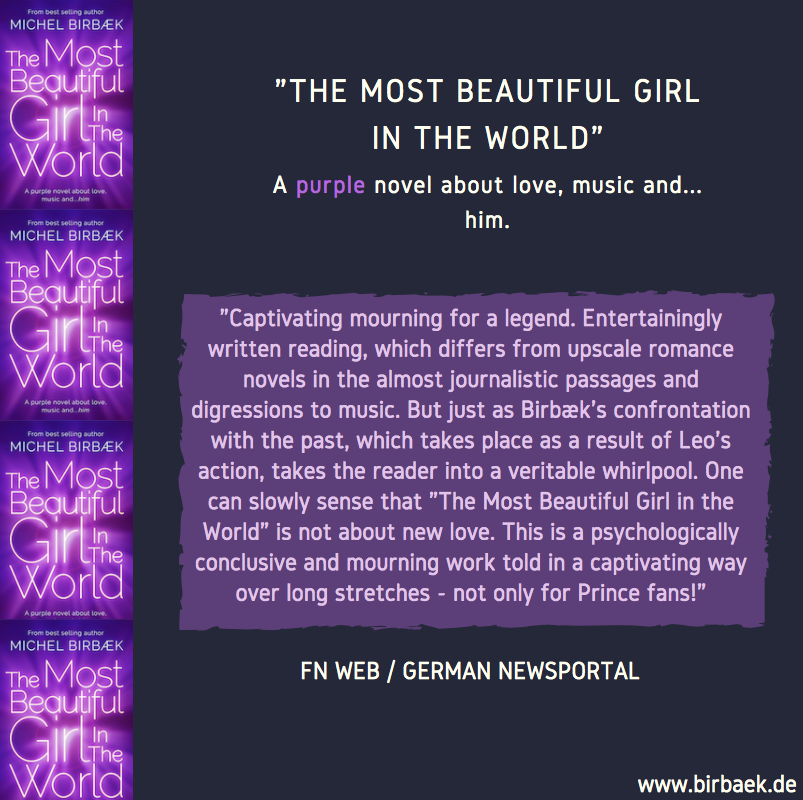 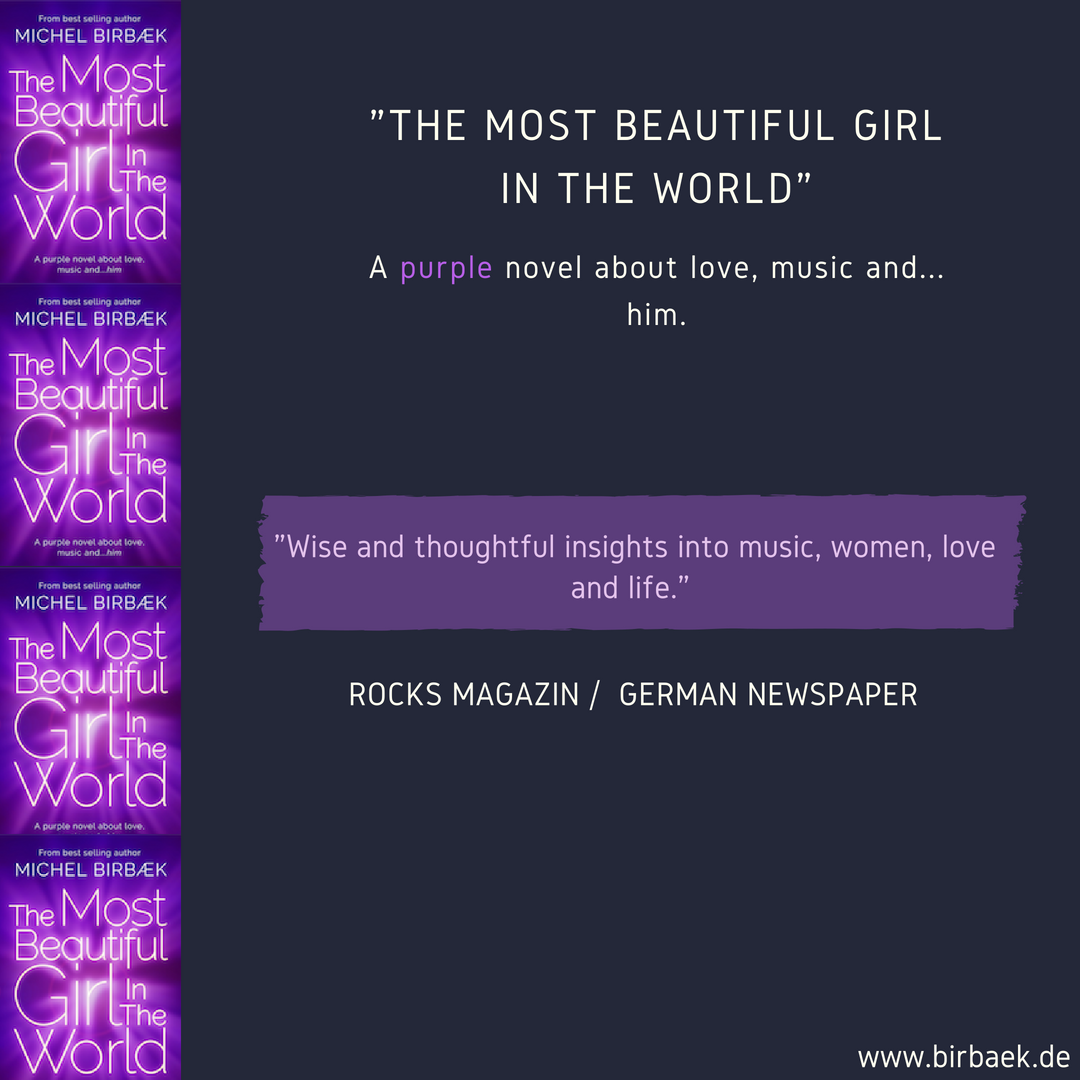 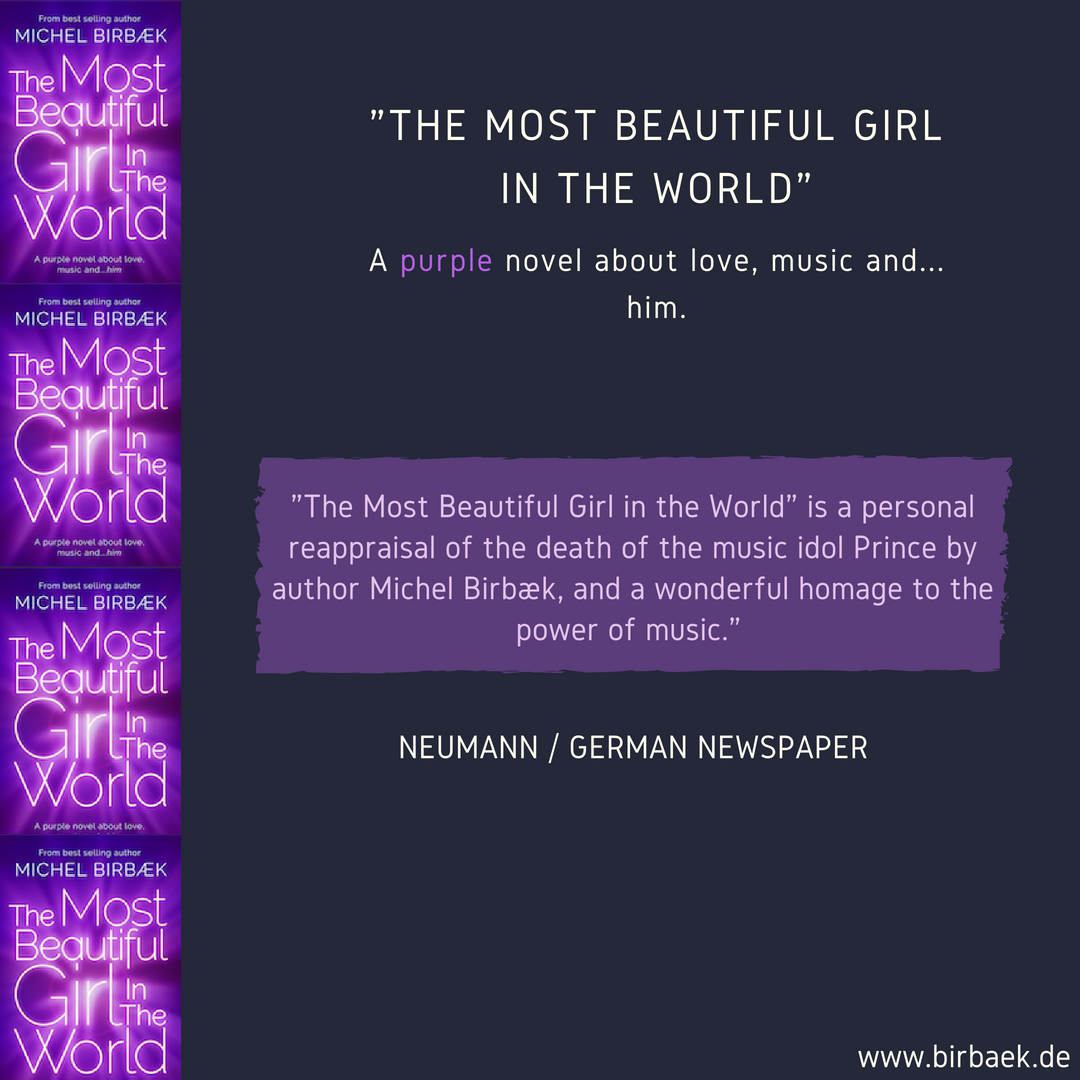 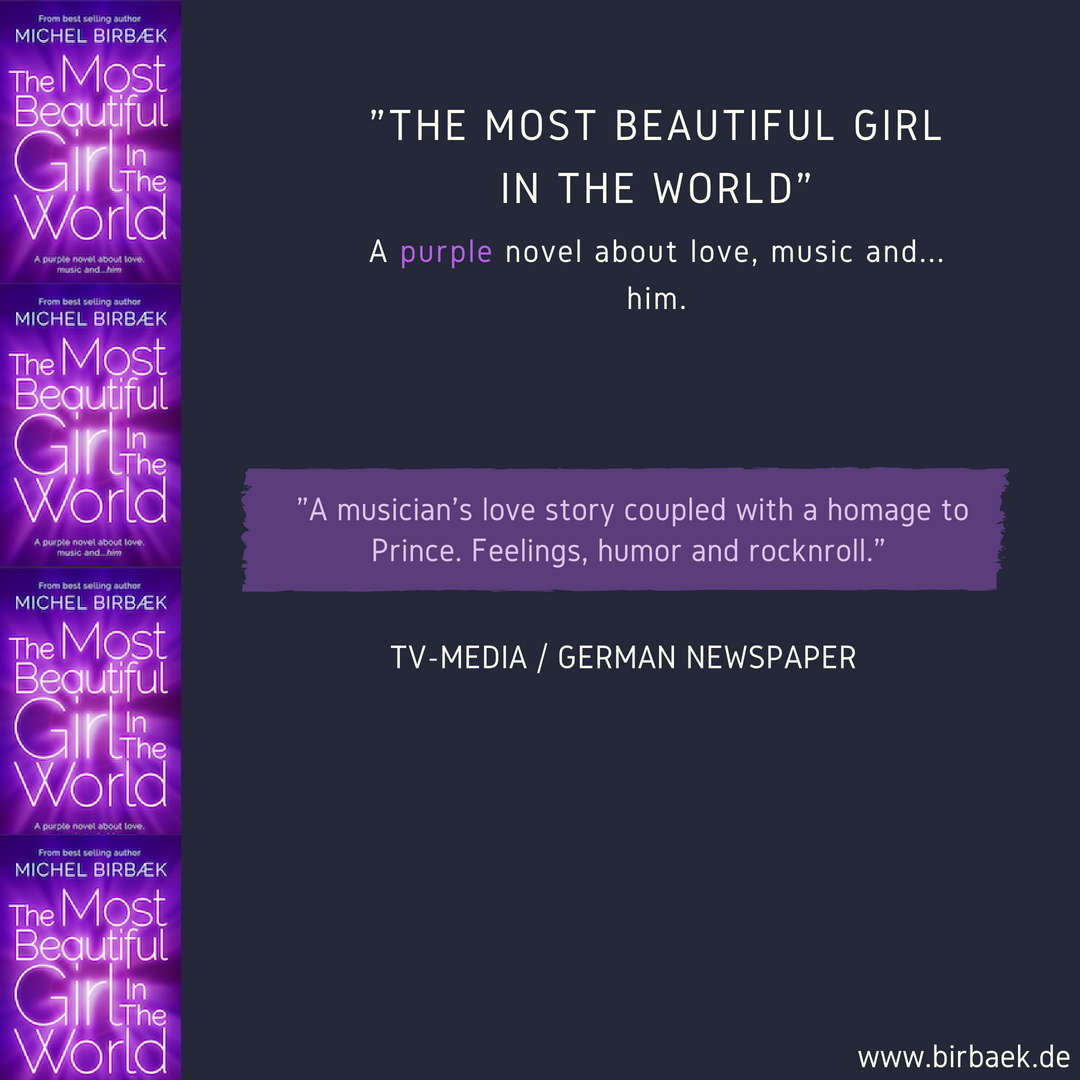 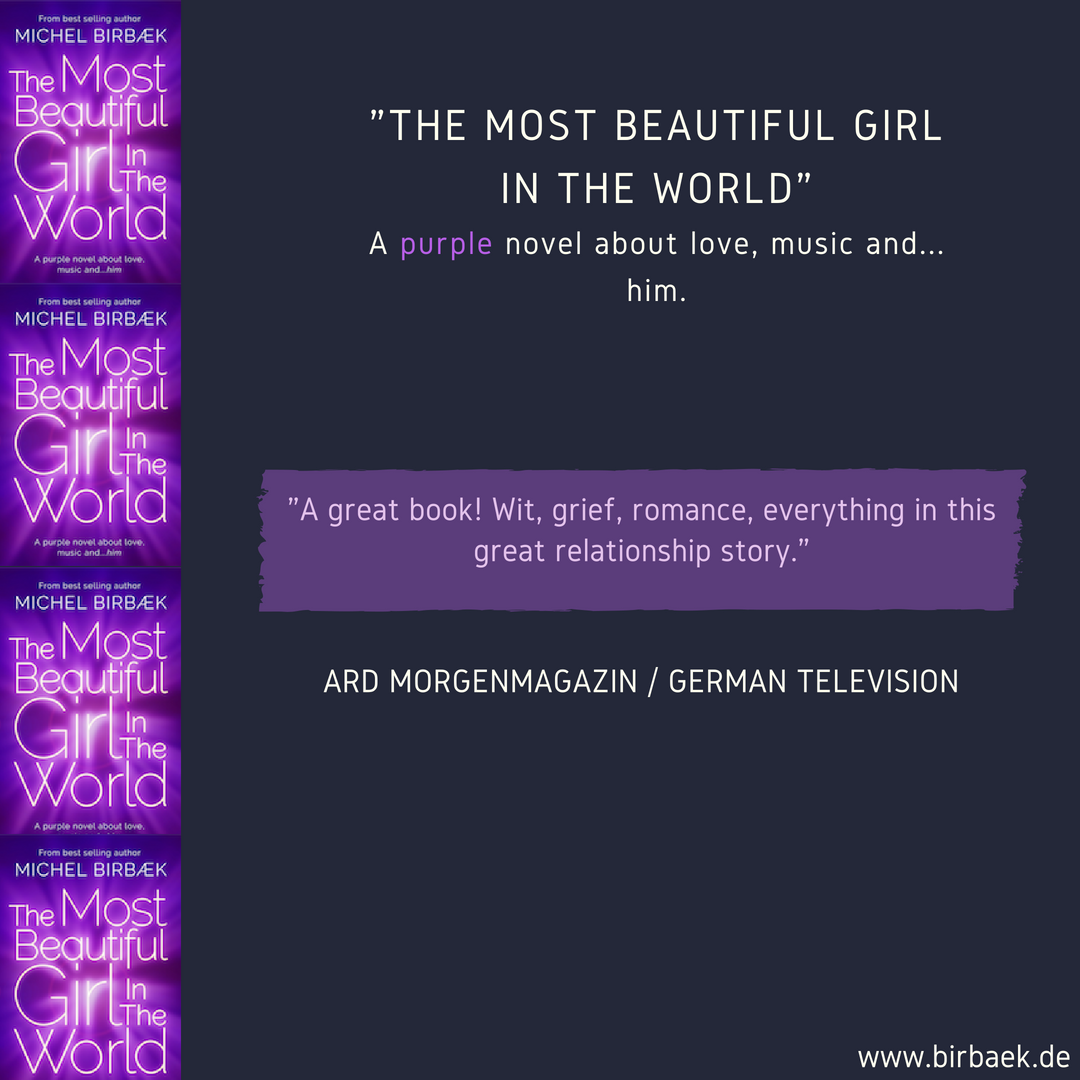